Kurt Busiek is (among other things) a comic scriptwriter. Not so many years ago, Image Comics started to publish a work by him: Astro City. If I can remember correctly, since my memory is made of cork, Busiek had been already working for some time in the human perspective of the super-heroic experience. With his work, he tried to answer questions such as, how does a journalist view super heroes?, or, what are the feelings of someone who suddenly acquires great power?

Let’s talk for a second on the samaritan. In principle he’s a guy from the future, sent to solve an error that will lead the Earth to a catastrophe. However, during the journey in time, he becomes nearly as powerful as a god. In a clear reference to Superman, Busiek develops the character as a journalist, with black-rimmed glasses and an absent-minded attitude.

The similarities with Kal-El end here, though: the samaritan does what he has to do, but that´s his job. When he comes back home he´s tired, dirty, wants to take a beer and watch TV; more than anything, he wants to fly. In several frames worthy of Ross, full with clouds, the samaritan dreams of himself flying, naked, between the clouds[1]. I found that detail in the character very attractive: you’re the most powerful guy in the planet, and you only want to fly? All in all, Astrocity is indispensable to understand the XXth century[2].

I’ll take a step ahead, towards a video game genre[3] that I haven’t walked lately: the flight simulator. What’s it about? what does it cover? and, above all, what does it simulate? Almost every title I can come up with, even the distinguished Flight Simulator, doesn’t try to simulate the feelings related to flying, but how to fly a plane. It´s true that many dogfight games include physiological effects such as fainting or the loss of blood pressure in the eyes due to in-flight G forces. Ok, perfect, but, how does it feel to fly? My first proposal is to polish the name of the genre and reduce it to what it is: flying machine simulation. And this is not snobbism, as the difference between flying and being_in_a_machine_which_flies is the difference between transcendence and taking the shuttle service, getting lost in a gigantic terminal and hearing that it’s your own fault that your luggage was stolen.

Gravity imprisons us, traps us, as we can hear in The Sandman:

when I dream, I remember how to fly; but when I wake up, I have already forgotten it

It is clear that flying is a human dream that dates back to our most legendary ancestors: we mustn’t forget Leonardo, nor Icarus. Busiek poses the question in Astro City, Gaiman in The Sandman, it’s part of the mythological corpus. However, is there any game who allows oneself to fly?

Let’s fly to South California University, Interactive Group: these guys have a research fellowship partnering with EA, which contributes the machinery. One of their work groups has developed quite a successful idea: cloud. Interesting from head to tail, it worths every single of the 38MB to download, since it is a real flight simulator (or, at least, it was).

The game’s approach is interesting: you fly and you have the power to shepherd the clouds. Literally, the game is about doing things with clouds: crash them to make rain clouds, shape them, choose where to make rain… many options, indeed.
Before getting to the core of the game, I would like to highlight its music. It sounds slightly like a teenage romance movie; ironically enough, it works very well among the whole and it can be listened to alone with no trouble.

The game mechanics are so simple that they offend: you can move push, attract, absorb clouds[4] and release them. But not even this is the key. Why has this game been so successful? What makes it a true flight simulator? A combination between the game camera and the mouse control. There’s no magic other than that. 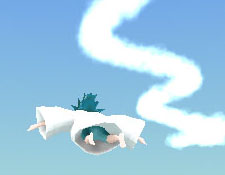 I don’t want to think on the hours invested in adjusting the character’s speed and how the camera orbits around it. There’s a real feeling of flying, or at least there was. Something terrible has happened: the game has been updated.

The former cloud version featured freeflight. You could shepherd clouds or simply take pleasure in watching the sky and fly, just like the samaritan. As you can see in the picture, the art used was schematic, purposedly irreal, almost abstract. Flying over an archipelago of islands worthy of the little prince, with no other intention than enjoying the wind, the sound of the piano, the clean horizon and, if you want, give the clouds a nice shape… The game transmitted the feeling that you have when you lay down on the grass in a park in the summer and you watch the sky through the trees.

I believe that the cloud team has erroneously decided to cut the character’s wings, what a slip-up. They have invested time in creating a foggy background which surrounds the character and obviously allows them to play the game in modest computers by employing LODs (Levels of detail) and distance occlusions. The idea is not bad, but it should be optional. When you fly without an engine and unaided it is good to have references, and the distances system may leave you without them. They have also reduced the possibility to descend/ascend. Too bad. They deprive the player of flying freely. And there’s where the game dies.

This cut forces/persuades the player to complete the mission, since it is not possible to explore cloud’s world (which, by the way, is almost empty), located far away below him. I want to believe that the designers came to the conclusion that they were developing a toy more than a game. It is likely that they are right: it is hard to establish a challenging mechanic in a system which constantly whispers: relax!

All said, it is still worth trying this game, if only to try an approach which doesn’t require you to squeeze to the last picogram of adrenalin out of your body.

–
If someone knows of a game which simulates the experience of flying, that´s to say to fly by opening your arms and raising up to the skies, please tell me so that I can add it to the article.

[1] Yes, according to Freud, this subconscious image has to do with a deep narcisism and the desire to make out with the mother. Let’s choose Jung’s way… the samaritan likes to fly 😉
[2] Needless to say, pride aside.
[3] I don’t like the expression very much, but it is clear and that´s good.
[4] This is an imaginative game, >ahem<