Women, that beautiful 50% of the population which handle more than 50% of the small consumer’s money! Let’s go over a couple quick facts related to girls and interactive computing:

1. No sane woman will ever enter a Micro, Game, Microplay -or whatever they are called. Have you seen those places? They are full of nerds, have enormous cardboard figures of a half naked Lara Croft on display -or worse: featuring a six-feet-high Mario!… If they were searching for ways to repel girls, they really nailed it. Unless games are offered for sale in formats, places and environments that are not directly obnoxious to girls, there will be no way to sell them anything… because they’ll never see the product in the first place.

2. Girls are as able with the keyboard, mouse, steering wheel and joystick as most of the guys I have the dubious pleasure of knowing. So no, if they don’t like games it’s not because they have hands “too small” or any other foolish explanation alike. Actually, this is the real problem… 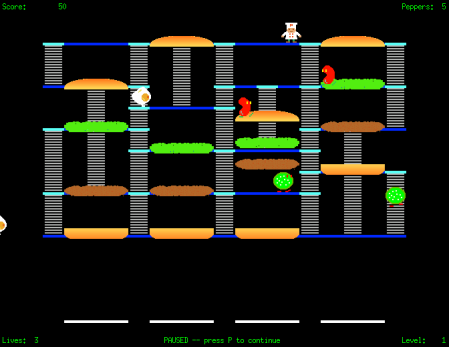 Let me pose a hyperbolic hypothesis (which I will undo with counterexamples): girls simply don;t like videogames. Could this be possible? After all these 25 years of development, gamer culture, unforgettable characters, they’ve been just “left behind”? Let’s think about it:

Not a very long list, isn’t it? However, I can say without hesitation that the girls I know like these games, and they like them lots! Therefore, it seems that there are some games that they like. Mere chance? I don´t think so. All these games have several things in common:

1. They are aesthetically pleasing games (save the Burgerspace, which is cute, something much harder to achieve than beauty).

2. They have straightforward controls. From the five games in the list, four are controlled with four directions the most, and from these four, three follow the “left-right-rotate” scheme. They don’t force you to learn 100 commands in order to play (see Mechwarrior as an example of that category).

3. With the exception of the Sims, they have very simple rules, are divided in stages and are not aggressive games towards the gamer. They don’t scare you, they don’t urge you to be alert.

5. The levels are short (with the exception of Lumines’ “challenge mode”, where the background and “tileset” change). The gratification is continuous and it’s given in short intervals of time. Anyone who has played Panzer General knows that you can play for hours… and you still lose as soon as you lower your guard!

6. Thepresentation must be agreeable, nice, well designed, funny… The girls I know spend much time choosing their characters, not because they are deciding on level skills but because they want to know that the models, textures and animations are cute.

With this I finish, for now, my second albeit the first one to be translated article on video game design. I hope to release more materials soon. I encourage you to add to the list the games that the girls you know like.