Also published in Spanish by Articmist

Heather Dale is a fantastic canadian singer and producer, able to take us to places long ago forgotten while she tells us stories with her wonderful voice.

J:Thanks for your time, Heather… Give us a global vision of your musical trajectory.

I am always looking for new stories to tell… I enjoy studying legends and stories from around the world. I think that every story, no matter how old it is, or how strange it seems, can tell us something about ourselves — it can help us understand each other better.

J:We could say that your music is angelical, magic, ethereal, intimate sometimes, sweet and very well produced. What feelings do you look forward to conveying in the listener?

Thank you! No matter what I say in my lyrics, I try to be as honest as I can. If I feel sadness or happiness, I hope to encourage my audience to feel the same thing as they listen… I often have people who cry or laugh out loud at my concerts. It’s a great feeling to share each moment with my fans, when I’m on stage.

J:Your influences are the Celtic folk, pop music, rock…. but the lyrical component and the voices are very important in your works. Other styles like the jazz can also be observed… Is the mixture between the antique and the modern thing a way to open new musical sensations?

I never like to do things the easy way, or to simply mimic what another musician is doing. Sometimes that’s hard — for example, I’m very influenced by Loreena McKennitt and Sarah McLachlan, but I want to make sure that I always sound like myself. I would rather be known as “the first Heather Dale”, rather than “the new Loreena”, even though I love her music! 🙂

Also, I combine different musical styles to try to tell my stories better — I think it helps my audience feel connected to each culture. For “The Road to Santiago” (the title track from my new CD), I wanted to explore some Spanish melodies and percussion; and for “Sedna”, I wanted to capture the sound of Canada’s native Inuit people, and so I used a sample of real Inuit singers, as well as their special frame drum. With my King Arthur songs, I want to transport people back into that time, while still showing them how much life today is the same as life in the Middle Ages… so I play with different styles: Celtic, jazz, folk, rock… everything working together. 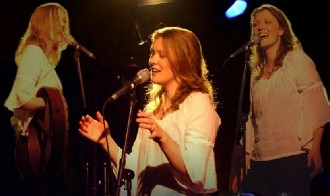 J:The thematic of your work is between the tradition and old legends. Is this your biggest inspiration? For example, all your Cds and especially “May Queen” are directly inspired in the King Arthur. Has perhaps your music some of the magic of Merlin The Magician?

I love the King Arthur stories… they are so complex and full of wisdom. The stories wouldn’t have survived 1500 years unless they had something important to say: they talk about hope, betrayal, honest love, crazy families, courage, hard work, and all the things we still experience in the 21st Century. Life is not so different after 1500 years!

Funny you should mention Merlin… I have a friend, Barbara Miller, who teaches about the Spanish Merlin legends at a college in the USA. She has shown me that in Spain, Merlin is seen as very passionate and sometimes frightening; he’s a bit of a devil, even though he’s beautiful and powerful. I like this idea — that Merlin was not always old and tired. Because of that, I don’t look at elderly people the same way anymore; I realize that I will never know what an amazing life they had. That’s the wisdom I learned from Merlin! 🙂

When I started recording, I knew I had two options: 1) wait for a record label to discover me, or 2) start working immediately. I am not very patient, so I started working immediately! 😉 As I learned more about the music industry, I realized that a record label simply loans you enough money to hire experts, and these experts help you make your CDs. So I took out a loan at my bank, and researched everything I could about making recordings… if I couldn’t learn to do it myself, I would hire an expert with my own money.

I called my new company Amphisbaena Music, because an amphisbaena is a two-headed dragon — one head looks forward (like my musical styles), and one head looks backward (like my interest in history). My company now helps 25 other independent artists, as well as myself; we all fund and produce our own recordings, but together at www.AmphisMusic.com we help to publicize each other’s recordings.

J:In fact you help to the production of new musical talents… Does Amphisbaena try to fill some musical “hole” not covered by the commercial industry?

As I was learning to make recordings, I “practiced” by producing CDs for other new artists. This was excellent experience for me, and I got to work with some wonderful musicians and storytellers, who couldn’t have made a CD otherwise. Now that I’m so busy with my own performing career, I don’t do much production work anymore, but I’m still in contact with those artists and we sometimes perform together. Amphisbaena focuses in particular on “historically-inspired recordings” — by this I mean that all the artists are trying to create something new which has been inspired by history. We have a Norwegian storyteller (Morgana bro Morganwg), a Canadian singer/poet who writes about the Medieval era (Hector of the Black Height), and an American instrumental group (Musica Subterranea) which plays music from the Renaissance but also teaches Renaissance dances to anyone that wants to learn! I love that all these artists are inspiring new generations to study history in new ways. 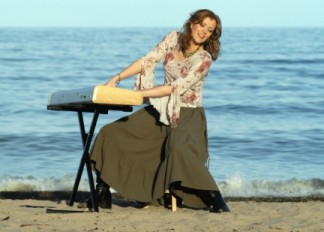 About your live performances… Your last tour has been through Canada (your country), United States and even sometimes you have toured in the United Kingdom. Do you plan to come play in Europe? In Spain? Is Heather Dale well-known in the Old Continent? How are your concerts?

Since late 2004, I have been doing a lot of touring… in fact, this year alone I have travelled 38,000km to bring my music to new areas. I’ve played all across Canada (which is wider than all of Europe), and play occasional shows in the USA as well. But I’m most excited about my current tour in Sept/Oct 2005… I will be touring the UK, as well as visiting Budapest, Hungary and (best of all) Santiago de Compostela in Galicia! I have wanted to visit Santiago for many years, even though I don’t speak much Spanish; I will be there from October 11-15. I don’t have any formal concerts planned, but I plan to sit in the town square and play music for the pilgrims. 🙂 I hope they enjoy it!

I sing and play lots of different instruments in my shows: piano, bodhran (an Irish hand-drum), tin whistle, dulcimer. I usually tour with Ben Deschamps, and he plays guitar, double bass, and flute… so our shows have a lot of variety. We will be doing a lot more touring from now on — I spend 4-5 months away from home every year, but I just love travelling and seeing the world.

J:Your last work “May Queen” (your fourth CD) was published in 2003. Do we need to wait a lot to listen to new projects?

I just released my fifth CD in 2005… it’s called “The Road to Santiago”, and it has 12 songs inspired by different cultures: Canadian, British, Irish, Spanish, Greek, Italian, Caribbean, and even Canada’s native Inuit peoples. It often takes a long time for me to make an album, because I wait for inspiration — I know some songwriters just write every day, but I prefer to travel and explore the world, and then let the songs develop slowly.

J:Is good music an antidote against bad moments in life?

Absolutely! I think that music can be a very healing and strengthening force — it also brings us together, even when we can’t talk to each other in the same language. I’m so happy when I hear from my fans; they listen to my music in the brightest and darkest times of their lives. They play my music at weddings, births, funerals, celebrations, memorials… I really makes me feel like I make a positive difference in the world with my music. I can’t think of anything better than that! 🙂

J:Thank you, Heather. We will continue enjoying your beautiful music.

2 thoughts on “In the spotlight: Heather Dale”