There’s no doubt that Goldfrapp is one of the most interesting groups in the current music scene. But let’s start by the beginning. In the late 90’s, Allison Goldfrapp, alter having collaborated with some indie artists, joins Will Gregory so as to bring up the duet Goldfrapp.

Their capacity to integrate multiple musical (and non-musical) references to their particular stamp, is what has already converted them in a cult group.

Their debut album “Felt Mountain” was welcomed by critics and successfully received by the audience. Fresh air! And though their following “Black Cherry” presents several changes, these albums are only different in the surface, because what tells Goldfrapp from other groups is a very gorgeous range of influences (which gives inward coherence to both works).

Let’s go over those influences: 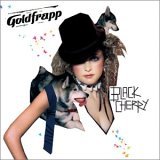 Well. Enjoy the style and the talent of this peculiar musical collage with own personality called Goldfrapp.