(Freely “rearranged” from the babelfish translation of the page above.)

I highly recommend that you take a look at this article even if you don’t know japanese, since its pictures (scroll down a bit) beautifully illustrate several techniques currently used to make real objects from 3D models. In this case the subjects are molecular structures: these techniques not only bring them to a human scale but also to the human world, thus helping scientists twice. Furthermore, some of the machines used, like the Roland mdx scanner and milling machine, are getting cheap and easy to use enough that in a near future they may become as common as photocopiers!

The antialiasing is real-time and perfect (no really it is) while the textures use conformal mapping which means no stretching or mapping artifacts like you get with typical projective mapping. 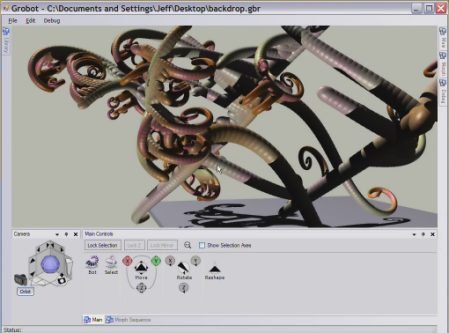 Jeff Anderson has updated his blog with some new videos showing Groboto, the 3D organic art program, in action. It seems that the hopes I showed in my last article on the beta are being confirmed. The interface proves to be friendly and powerful; you can rotate the model effortlessly at any moment, and manipulating the seed (the little shape you start with) or the lighting is also very easy. Everything casts shadows over everything, and the textures have a crisp look due to the special kind of bump mapping used.

There are still many things about Groboto that remain a mystery: will it feature predefined shapes like the previous version? will it have a genetics lab? what will the export options be? When the beta testing is open I’ll be able to answer those questions. Until then, the expectations are getting pretty high 😀

A Synetic building is an airy and lace-like basketry of thin arcs patterned in curvilinear triangulation.

The structure is based on the principle of self-similarity enabling it to work from the nano to the macro scale.

oh… that must be the wall… but, where’s the Bio?

(…) reactive surfaces inspired by botanical life that reflect and END_OF_DOCUMENT_TOKEN_TO_BE_REPLACED 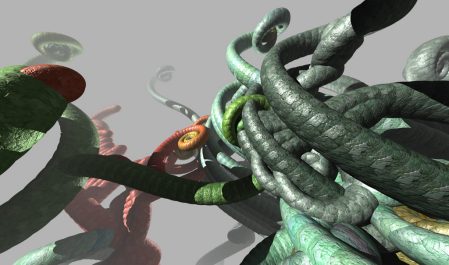 Jeff Anderson, developer of Groboto, has kindly sent me the link above. It points to his new blog, where he´s posting images made with the beta for the new version of the program. This is very good news for two reasons: it means that the work is advancing at a good pace, and it shows that it is advancing in the right direction. Several of the pictures he has posted are screen captures that show the program´s interface (after you click on a picture for the first time, notice that there´s an icon over its upper-left corner that allows you to see the full size version). The controls shown look reasonably intuitive and the images, impressive. If the rendering speed is as fast as he claims (this picture was rendered in just three seconds) and the interface is as easy as to not interfere with creativity, Groboto may be truly one of the most interesting programs since William Latham released Organic Art (V2 will be the first version for both windows and macOS; V1.6 already stands as one of the most unique and interesting programs of its kind for the mac).

We’re not quite ready to announce release dates for the beta or final versions, but we though we’d update you on our progress.

Groboto has been defined by its authors either as “an intuitive 3D art tool”, or, more modestly, as “an amazing 3D program where kids can create cool images through the exploration of math, science, and art”. However, this is a piece of sotware which defies categorizing since it touches many different fields. Its key point is that of growing both organic and inorganic- like shapes, (hence the Gro-), that emerge from the trail left by a Bot (hence the -boto). In this sense, Groboto reveals an inheritance from the Logo language as much as from the principles of Evolutionary Art. In version 1.6 (the one I bought), it was possible to tweak the organic shapes, crossbreed them, evaluate the offspring from several points of view and use the selected individuals as parents for the next generation, among many other things. Actually, it was even possible to create games based on the bots´ behaviours (I didn´t go that far, though). Although the main view END_OF_DOCUMENT_TOKEN_TO_BE_REPLACED