Every key of the Optimus keyboard is a stand-alone display showing exactly what it is controlling at this very moment. 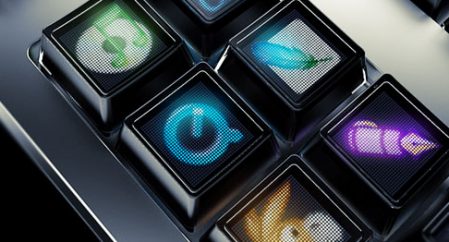 Designed by russian Levedeb Studio, the Optimus Keyboard will make use of cutting edge technology to redefine the peripheral’s functionality.

As we know, a computer keyboard is bound to whatever was printed on the keys when manufactured. This is something we usually don’t pay much attention to, unless we use software which relies on shortcuts, which happens… quite a few times, doesn´t it? Be it photoshop, finale or quake, every power user ends up knowing the location of most of the shortcuts by heart, but this knowledge only comes after consulting the manual and reference charts almost constantly for a good amount of time. Memorizing shortcuts is vital to productive work, but casual users and especially newcomers to a program would greatly benefit from any kind of on-keyboard mapping. So far there is a number of dedicated keyboards, both in the professional and gaming fields(1); however, these keyboards are again bound to the layout originally printed on the keys. The perfect keyboard should be completely reconfigurable, in a way so that the user could at any given time change its layout to display the functions related to the program in use…. which is exactly what the Optimus Keyboard does.

The key to understanding the way in which the Optimus Keyboard works is stated in the quote above: each one of its keys is, in fact, a tiny display. To make it possible, the designers use OLEDs, that’s to say, Organic LEDs, that’s to say, Organic Light-Emitting Diodes, that’s to -pant, pant- say, thingies which react to current by emitting light, so small that they can be printed on screens to make colour displays. OLEDs have many advantages compared to LCDs (Liquid Crystal Displays). To name two, they need no backlight, therefore using less batteries and rendering better colours, and they can be printed over a flexible substrate, which makes it possible to create foldable displays (the future of origami?). OLED screens are already being used in things like (add cool before every element in the list) mp3 players, PDAs, watches, cell phones…

Levedeb Studio previously used OLEDS in their Optimus mini-three customizable auxiliary keyboard (first units are under production, to be delivered in mid-August). Their following step, extending the same concept, has been the Optimus Keyboard. We are still some months before the release, and from the point of view of a possible future user some things concern me, regarding price (obviously) and especially durability: I wonder if the screens will remain transparent after a year of use, the displays as bright, and if pouring some coffee over the keyboard will render it useless… for now, let´s be optimistic and wish Lebedev Studio all the luck. 🙂