So far I have dedicated many hours to create a good fistful of tools to develop 3D multimedia applications in real time, that is: video games. After erecting structures for Finite State Machines, scripts, messages and (soon soon) triggers, I decided to merge the whole thing into a single concept, and try to bring out errors, bugs, etc. I thought it would be quick and easy to make “a small game”. I was wrong.

When someone starts in an art, in a sector completely new, he or she has to be ready to accept guidance from time to time. For instance, it is a very good idea to start by making applications which are more or less similar to that other one, or even clones. I decided to take Pacman as my source of inspiration. 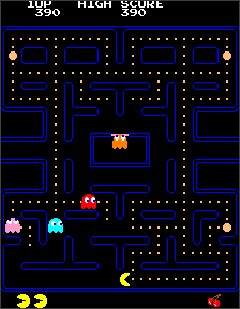 The damned pacman is one of the most successful and apparently simple games ever. It has been sold for 30 years, so I supposed it would still be funny. The problem comes when you want to do something similar and in 3D. Pacman has several interesting features:

1. The objective is to go over the whole path at least once without being caught by the ghosts. Every “pill” taken adds some points to the gamer´s score.

2. There is no freedom in said route; the walls and crossings limit movement but the player never feels trapped; it is naturally understood that the walls are… walls and you can´t go through them, jump over them, dynamite them…

3. Even though the “power pills” are actually optional, we now see them as essential to the game´s design, however there were versions of the game without them. In fact, they delay the goal (though they allow you to chain-massacre enemies, with a bonus to the score).

4. There are other score bonuses (the fruits), and more or less every zillion points, you get a new life.

5. The game has no background: Is Pacman happy with eating pills in half-light atmosphere with repetitive music? Why is he chased by two-eyed cylinders? What happens when you have eaten all the pills in the world?

Departing from actual playing experience and a little bit of history and analysis, I thought it would be easy to make a 3D version of Pacman with something of its own. I wanted to maintain the same structure, so that the game would be about going over paths as soon as possible, but in shiny 3D. Balls floating in the air define a path. Taking those balls and finishing the level gives points. There are enemies that chase you, and if they catch you, you lose a life…

The design continued for some more paragraphs. Unfortunately, I didn´t see the fundamental detail in all of this story: in Pacman, it is easy to know where the enemies and the remaining pills are because you can see the whole stage at a glance. That which looked like a technical limitation caused by the scarce performance of the initial design platform is, in fact, a brilliant design decision. The same game in a 3D environment would demand lots of help metaphores mini-maps, on-screen arrows, direction indicators, alert sounds when a monster closes from your back, etc. All in all, the game would be so difficult to understand (maybe 20 or 30 seconds, compared to 2 or 3 for the original game), that it wouldn´t worth the effort to make it only to play Pacman, which is already very well designed.