I hate fighting games. My first contact with them was the Street Fighter 2 coin-op, and already then I thought it was a ridiculous game. That’s strange, because I could finish the first Double Dragon without blinking, but there was no chemistry. It was a game without power-ups, where in order to get the control dynamics you had to smash fifty buttons at the same time in a shaolin dojo… if you fought against the green foe (Blanka) you were seriously beaten up, but if you chose him then it was Dhalsim who kicked your butt, and so with many other drawbacks that I won´t describe now.

All in all, the worst was the intention that it were a serious game. The characters punched each other with a solemn face while shouting “IiiUUUuuuKEEEEEnnn”, shooting blue energy balls and making weird gestures with their arms… I believe that if it had been made a few years later and with a more humorous approach, the game could have been much more interesting.

Here is where Rag doll Kung-Fu entered the stage. I couldn’t believe it, yet another kung-fu game! However, it seemed that the game had received good reviews and lots of comments in Gamasutra, so I tried it and I liked it. I went through absolutely every level in one go -though it´s clear that the story mode is aimed to train you for multiplayer. The characters are rag dolls, but they can stretch their joints, which behave like springs. Everything is controlled with the mouse. You load the Chi by making small circles with the cursor, and attack by grabbing a limb and throwing it towards the opponent. The more the Chi you have loaded, the stronger the hit. Sounds easy, doesn´t it? Circle- hit- Circle… it looks weird in the beginning, but in some ten minutes you will be fighting like a pro. 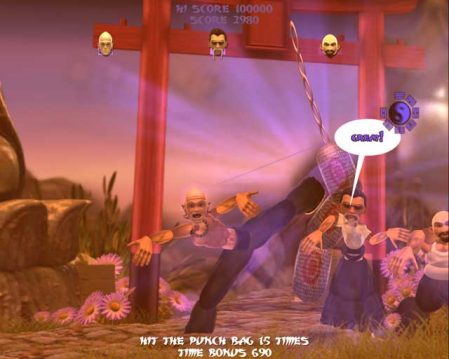 The cutscenes are home tapes by amateur actors, excellent! The special powers are literally mind blowing: you eat hallucinogen mushrooms that make you fly so that you can capture the magical glowing butterflies, which give you fire fists! Everything in this game is comical: the characters, the weapons, the power-ups, the stand-alone games (high jump, shaolin soccer, etc). After playing for some time, I wonder if a successor to Worms has been born. If you have some time try it, it is really funny. And if you have the chance to try the multiplayer, go for it!